Luigi Largo is the eldest son of Rotti Largo. He wields a knife at all times and is usually wearing an ascot.

Luigi Largo was born November 20, 2019[1] to Rotti Largo and an unknown mother. He is the eldest of the Largo siblings. Not much is known of his childhood, and what is known comes from the extended universe.

Luigi is first shown in Rotti's office, as Rotti receives the incriminating photos of his children. He appears ashamed when Rotti sees his picture and is disgusted with him.

Later on, Luigi appears in a lab with his siblings and several Genterns. When Amber asks after Rotti, Luigi attempts to assert himself, only to end up taking a knee to the groin. He snaps at Pavi when he makes a lewd joke, and the pair begin to argue over which of them will inherit GeneCo when Rotti dies ("Mark It Up ").

Luigi and his siblings are later seen at the Italian Renaissance Fair. Luigi is upset over not having his coffee, and lashes out at several people. When one finally delivers his coffee, he finds that they have given him decaf, and proceeds to stab the assistant in question with his knife. He finally stops when Blind Mag intervenes.

Luigi jumps into the middle of Amber's verbal assault on Mag, and the debate over who will inherit GeneCo resumes, all three siblings falling into it. They desist only when Rotti arrives and orders them all away. Luigi and Pavi are later seen at the ribbon-cutting ceremony and are there when Amber is a no-show.

Luigi is next seen in his father's office again, when Nathan Wallace, the Repoman, is called in to receive his next assignment: The repossession of Mag's eyes. He, his brother, sister and father all order Nathan to do the job. When Nathan hesitates, Rotti, Luigi, Pavi and a group of Genterns draw out the Repoman in him ("Night Surgeon "). 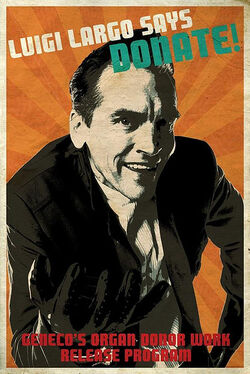 That night, Luigi is present at the Genetic Opera, arriving in a flashy manner along with his brother and father ("We Started This Op'ra Sh*t " and "Buon Giorno "). During Amber's performance, he is seated in the audience, and steals his neighbor's popcorn. During Mag's performance, he is seen offstage with Pavi, playing with some of the fake snow. After Mag's fall and Nathan's arrival onstage, Luigi attacks Nathan with his knife and brings him down.

As the audience watches and Nathan bleeds out, Luigi, Pavi, and Rotti expose Nathan's deep, dark secrets to Shilo Wallace. When Rotti first tells Shilo to kill Nathan, Luigi shouts an agreement; however, when Rotti then adds that he will leave her GeneCo if she does so, Luigi panics and joins Pavi onstage as they plead with their father to reconsider.

After Rotti succumbs to his terminal illness and dies, Luigi is seen with Amber and Pavi as Amber announces her appointment as head of GeneCo. Luigi applauds Amber and becomes enraged when he does not hear the reporters clapping as well, threatening to kill them all before breaking out into tears over his father.

Luigi demonstrates a very unstable personality throughout the story. He is exceedingly violent, unafraid to lash out physically or verbally with others. He seems to take a macabre pleasure in blood and gore, given his reaction to Nathan in "Night Surgeon". Luigi and his brother, Pavi, also goad on Nathan in "Night Surgeon" and the crowd during "Sawman's Lament", showing that he will convince people to do things for his benefit. At the end- it could be debated if his tears were real or not- he does cry over Rotti.

Luigi and his father are not close. Rotti seems disgusted by Luigi's tendency to kill anyone who happens to bother him, and Luigi, as he argues with Amber and Pavi, says "When the geezer croaks, you will all learn to respect me!" Indicating that he does not care if Rotti dies or not. In the end, when he bursts into tears and says "Dad!" it is unclear if he is being sincere or not.

Luigi is antagonistic towards his siblings, attempting to boss them around and assume control over them. He chokes Pavi multiple times, though is also seen almost playfully sprinkling snow on his brother during Mag's performance of Chromaggia.

Amber and Luigi are competitors for their father's approval, which neither seems to be performing particularly well at. They are constantly arguing, though the only one shown to become physically violent is, ironically, Amber ("Mark It Up "). He berates her consistently but appears to be at least superficially supportive in her takeover of GeneCo. 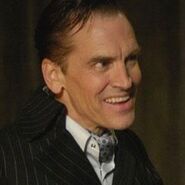 Add a photo to this gallery

Retrieved from "https://repo.fandom.com/wiki/Luigi_Largo?oldid=4727"
Community content is available under CC-BY-SA unless otherwise noted.