Marni is shown to be a brunette with curly hair to the shoulder. She is always shown wearing a cameo necklace, which Shilo bears for the entirety of Repo! The Genetic Opera .

Marni, born in 2011, was Rotti Largo's fiancee and Blind Mag's best friend when she met Nathan Wallace, and promptly fell in love with him. She left Rotti at the altar and was married to Nathan, shortly thereafter becoming pregnant with her first and only child, Shilo, whom she names Mag as godmother to. Late into her pregnancy, she fell ill, though, luckily, her husband was a doctor. Enraged by her leaving, Rotti arranged to sabotage Nathan's work on curing his wife, fatally poisoning Marni.

Though not much about Marni's life apart from her association with Rotti, Nathan and Mag is revealed, when Mag shows Shilo the hologram projection of Marni, Marni is singing. It is possible that, like Mag, Marni was a singer, or at least had interest in it.

Though her headstone is in the graveyard, Needle Through a Bug reveals that her embalmed corpse was, in fact, kept in the wall of the Wallace residence until GraveRobber steals it on Rotti's orders.

Marni and Nathan eloped after Marni left Rotti, and it is safe to assume that their relationship was a happy one, for however long it lasted. Nathan was devastated after Marni's death, and carried the grief for seventeen years.

Though she left him at the altar, it is generally believed that Marni was in love with Rotti prior to her meeting Nathan.

Though their friendship was never explored indepth, Mag and Marni were known to be best friends. Marni was the one who introduced Mag to Rotti when the pair was dating. During the flashback to Mag's surgery, Marni is seen standing by Mag's bedside. 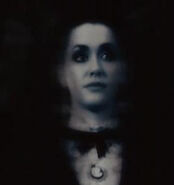 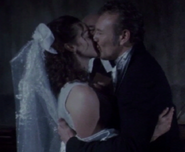 Marni and Nathan's wedding
Add a photo to this gallery
Retrieved from "https://repo.fandom.com/wiki/Marni_Wallace?oldid=4655"
Community content is available under CC-BY-SA unless otherwise noted.