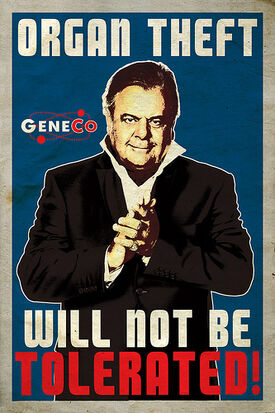 Rottissimo "Rotti" Largo is the ailing GeneCo president and founder, looking for a worthy heir. He sees his own children as "vultures" and "ingrates", and is bitter towards Nathan for stealing Marni from him. He is the one who poisoned Marni, in a jealous rage.

An older, overweight man, Rotti Largo is always well dressed in fashionable yet conservative clothing. His hair is a dark grey, later revealed to be a wig.

As the man who saved the world from destruction by organ failures, Rotti Largo commands a great deal of respect from the average citizen and public. To back up this image, he is upbeat and sociable during public gatherings such as the Genetic Opera, or when he is being interviewed. However, the fact of the matter is, Rotti Largo is opportunistic, sadistic, cunning, and manipulative, with virtually no pity for anyone. A great deal of the crimes he commits are never exposed, or easily forgotten (some of this has to do with him sending out the Repo Man to take down individuals who threaten to tarnish Geneco's reputation).

He is a very, very bitter person, regarding his three children as utterly disgusting failures; although his disgust towards their crimes is well-justified and correct, he sees no problem with the atrocities he commits, or so it seems. He is also a man who refuses to let things go; after seventeen years his anger at losing Marni to Nathan Wallace is still there.

Rotti has three children: Pavi, Luigi, and Amber. It is unknown who their mother is, but his relationship towards his children is highly antagonistic.

He was set to marry Marni before she left him and married Nathan Wallace instead.

Retrieved from "https://repo.fandom.com/wiki/Rotti_Largo?oldid=4711"
Community content is available under CC-BY-SA unless otherwise noted.