Shilo Wallace is a seventeen year old girl, the daughter of Nathan and Marni Wallace. She is arguably the main character of Repo! The Genetic Opera.

Shilo is pale and slender, reinforcing the image of fragility her father has impressed upon her. She is bald and wears a long black wig that is parted in the middle. She has a Victorian gothic fashion sense, with short skirts and ruffles and lace choker. She always wears a cameo necklace which belonged to her late mother and the wristband which monitors her blood pressure, reminds her to take her medicine, and is used to make phone calls.

Shilo's mother, Marni, became ill while pregnant with her. In Nathan's search to find a cure for the disease, he accidentally mixed in a poison, planted by one of the genterns working for Rotti Largo, with the medicine, resulting in Marni's death.

With Marni beyond help, Nathan performed an emergency surgery to save Shilo. Nathan told Shilo that she had a rare blood disease which she inherited from her late mother. It was this disease, he claimed, which killed Marni.

Shilo was, more often than not, locked and isolated in her bedroom by her father, and obligated to take her medication several times throughout the day. Occasionally, she would put on a gas mask and sneak out of her room to visit her mother's tomb.

One day, having snuck into her mother's tomb, Shilo chased a glowing blue bug out into the graveyard outside ("This will be quick".) It was there that she met the Graverobber, in the process of collecting Zydrate from bodies. When the pair are discovered by the patrolling GeneCops, she desperately followed Graverobber into a massive tomb, full of fresh corpses. Moments later she was roughly pulled from the tomb by GeneCops. Panic-stricken and feeling the effects of her illness, she pled with the patrollers to let her go. As the Repoman appeared and sent them off, Shilo fell unconscious.

Having woken in her own bedroom, Nathan pretended not to believe her and dismissed her claims about the incident (corpses included); in an attempt to be reassuring, he argued that it was all a dream. He then instructed Shilo to take her medication and leaves- careful to lock the door behind him. Shilo laments her captivity and curses her mother for passing the blood disease onto her ("Infected").

Later on, (though it is unclear if this occurred in the same evening), Rotti Largo called, claiming he might be able to help her find a cure for her sickness. Instructing Shilo to meet him at her mother's tomb, she was, upon arrival, forcibly dragged from the tomb by Rotti's henchwomen and thrown into the back of his limo. Though hesitant, she agreed to accompany him to the Italian Renaissance Fair in the Sanitarium Square.

Here, Shilo was formally introduced to Blind Mag, GeneCo's prime promoter and a singer she adored (a fact made evident with the many photographs she had scattered throughout her room). Having watched the ribbon-cutting ceremony, Shilo was once again dragged into a vacant tent by Rotti's henchwomen. At that moment Nathan called, noticing that Shilo had yet to take her medication (his watch providing the notification). In her attempts to appear reassuring, she narrowly deters him from returning home to check on her.

Shilo was surprised and somewhat relieved to see Graverobber, who tore a hole in the tent and rescued her away from Rotti and his entourage. He took her to an alley where Zydrate addicts hung out ("Zydrate Anatomy"). There she discovered that Amber Sweet is a Zydrate addict; it is Amber that informs her about Mag's contract with GeneCo: If Mag retires from singing and refused to promote GeneCo any longer, her eyes would be subject to repossession. When GeneCops flooded the alley to retrieve Amber, Shilo and Graverobber escaped on the back of a garbage truck, and Shilo was safely returned home.

Some time later, Mag paid a visit to Nathen's home, while Shilo was alone. Mag revealed that she was Shilo's godmother ("Chase the Morning"), and projected images of Marni singing opera, through her incredible eyes. Nathan arrived home and combatively forced Mag to leave, in spite of Shilo's protests ("Everyone's a Composer"). Shilo begged her father to try and save Mag from the potential Repoman, in which Nathan angrily told her to stay out of it; there are things in life beyond control, and this is one of them ("What Chance Has a Seventeen Year-Old Girl?")

Shilo became furious and resentful towards her father's attitude. Proclaiming that she was no longer a child, and tired of being dragged down by her mother's memory. ("Seventeen"). At the end of the song, Nathan slapped her across the face, and she passed out. As she slept, a call from Rotti reached her wristband, and Nathan discovered that Rotti had been in contact with Shilo.

Having regained consciousness and waiting for her father to leave the house, Shilo snuck from her room and was driven to the Genetic Opera by Rotti's driver ("At the Opera Tonight"). Upon arriving, Shilo learned of Rotti's terms for her cure: Capture the 'rogue' Repoman by using herself as bait.

Trapped in this small room, Shilo agonized about what she should (or could) do. As the Repoman entered, Shilo struck the back of his head with a shovel and learned that this terrifying figure was actually her father Nathan. By this time, it was shown on the TV screen that Mag had been killed on stage. It is unclear from the lyrics, but Shilo seemed to believe that Nathan was responsible for Mag's death. Shilo is furious with his deception ("Let the Monster Rise"), and storms out of the room, making her way down to the stage.

By the time Shilo reached the stage, Nathan was already there with Rotti, Luigi, and Pavi. Luigi attacked Nathan, wounding him badly causing him to lose significant amounts of blood. The curtain rolled open for the audience to witness the family drama as it unfolded. Rotti and his sons expose all of Nathan's secrets to Shilo, including the detail that her 'blood disease' was caused by the medication provided by her father. Nathan did this to keep her from the world outside her window.

Having finally revealed the truth, Rotti offered Shilo a gun and encouraged her to kill her father; If she did so, he would leave GeneCo to her when he died from his own terminal illness. Shilo refused and turned the gun on Rotti. Bound to a chair, Nathan urged his daughter not to make the same mistakes he did, and encouraged her to make her life worthy of remembrance. The lights suddenly flickered off, and Rotti ripped the gun from Shilo's hands; he successfully shot Nathan in the chest and collapsed, succumbing to his illness.

Shilo was left for a few moments on stage with her dying father. They expressed their love and affection for one another, no matter what happened in their lives ("Didn't Know I Loved You So Much"). Nathan died from his injuries, and Shilo was left to tearfully mourn the loss of her father before exiting the opera hall. ("Genetic Emancipation"). Shilo appeared to be free and unbound for the first time in her life.

Having been sequestered inside her bedroom for most of her life, Shilo has very conflicting views about the world. She is, on the one hand, rebellious, curious and dying to go outside and experience the world she's only ever seen on TV. This is displayed in "Seventeen " and "Infected ".

However, Shilo also displays a great deal of fear of the outdoors. When Rotti has his henchwomen drag Shilo from her mother's tomb and into the limo, Shilo panics and screams that she cannot be outside. She also begs Rotti to release her, once the limo starts driving off. during. Shilo is also wary of Blind Mag, in spite of idolizing her and hearing that she was her long lost godmother ("Chase the Morning").

Shilo's feelings for her father change drastically over the course of the story: In "Infected", she loves him but is bitter towards him for keeping her locked up. This bitterness and outright anger finally comes out in "Seventeen", where she makes a claim for independence and tells Nathan not to treat her like a child.

In "Let the Monster Rise", Shilo's anger is taken even further, turning to hate, when she learns that her father is the Repoman, and (Again, unclear exactly what she believes) seems to believe that Nathan killed Mag. As Rotti exposes Nathan's other lies, Shilo claims that she no longer trusts him.

However, in "I Didn't Know I Loved You So Much", Shilo says that she really does love her father in spite of everything, and weeps upon his death.

Though Marni died at Shilo's birth and therefore never knew Shilo, Shilo initially harbors considerable resentment towards Marni: In "Infected", she outright blames Marni for passing down the 'blood disease' to Shilo. But in "Chase the Morning", Shilo looks at the hologram of Marni with something like longing, indicating that she might not be as bitter towards Marni as one might think.

Shilo's room, upon examination, is covered in pictures of Blind Mag. She idolizes her and is ecstatic when she finally meets Mag at the Italian Renaissance Fair. However, when Mag actually turns up to Shilo's house later on in "Chase the Morning", Shilo is wary about letting her inside; and once she does, she keeps her distance.

Upon learning that Mag is her godmother and knowing what fate lies in store for her, Shilo becomes panicked and tries to find a way to save Mag. Later on, she is deeply saddened when she sees that Mag is dead.

Upon their first meeting, Rotti charms Shilo and promises her a cure for her disease, a key to the outside world that Shilo has been yearning for. Shilo buys into this deception right up until the end, when Rotti demands that she kill her father in exchange for the cure and GeneCo.

When Graverobber and Shilo first meet in the graveyard, she seems initially horrified by him and his job. Later on, when he finds her in the tent, she becomes irritated with him, telling him to leave before he gets her into trouble. He then helps her escape and, unwittingly, leads her to the information on Mag's contract. When they part ways at Marni's tomb, he waves goodbye. There is very little concrete information about how she regards Graverobber at the end of the story.

Shilo without her wig. 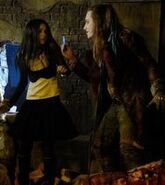 Add a photo to this gallery

Retrieved from "https://repo.fandom.com/wiki/Shilo_Wallace?oldid=4788"
Community content is available under CC-BY-SA unless otherwise noted.